Introducing the XO 3.0 TABLET for “one laptop per child’
Source: http://mashable.com/2012/01/08/one-laptop-per-child-tablet/
and
www.laptopgiving.org

One Laptop Per Child will unveil its XO 3.0 tablet at the Consumer Electronics Show in Las Vegas Monday. The fully functional tablet is designed to be inexpensive, use little energy and brave extreme weather conditions.


The rugged tablet includes the Marvell ARMADA PXA618 SOC processor, Avastar Wi-Fi SOC, standard or Pixel Qi sunlight-readable display, and supports Android and Linux operating systems. Unlike any other tablet on the market, it can be powered by solar energy, other alternative sources or hand-cranks.

“We’re proud to introduce the XO 3.0 tablet, showcasing the design, durability and performance features that make it a natural successor for our current laptops, which have been distributed to more than 2.4 million children in 42 countries and in 25 languages,” Edward McNierney, chief technology officer of One Laptop Per Child said. “The XO 3.0 builds on many of the technology breakthroughs we made with the XO 1.75, including the use of the Marvell ARMADA PXA618 processor, resulting in a significant decrease in power consumption — a critical issue for students in the developing world.”

One Laptop Per Child, a non-profit working to bring modern education to children in the developing world, aims to get a low-cost, low-power laptop in the hands of every student on the planet.

The released images of the XO 3.0 tablet seen don’t look much like the ones the One Laptop Per Child shared when it first announced it was working to develop an $100 laptop. The model set to debut at CES appears larger and more rugged.

The non-profit also announced it is ready to ship more than 75,000 units of the XO 1.75 laptop to students Uruguay and Nicaragua in March 2012.

Take a look at the XO 3.0. Do you think there’s an advantage to putting tablets in classrooms over laptops? Let us know in the comments. 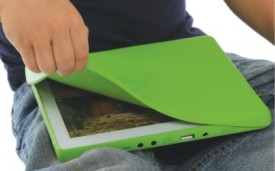