Romania’s Black Sea continental platform holds fossil fuel deposits of over 880 million tons, and the technology needed to process these resources exists and should be promoted. According to Iulian Iancu, chairman of the Lower Chamber’s commission for industry and services, the Black Sea is becoming a crossroads of energy transportation routes carrying energy resources that can be processed with the help of existing technologies, Agerpres informs. “All of a sudden the Black Sea is becoming a crossroads of energy transportation routes that carry raw materials such as oil and natural gas, raw materials that are transported not only through pipelines but also by LNG tankers, and a centre for capitalizing on the fossil fuels and renewable energy potential all around. And here I’d like to refer to a project that could be successfully implemented in riparian states, namely combining the region’s agricultural potential with its energy potential, and I’m talking about biomass, bioenergy, and biogas. Today’s technology offers us the possibility to make good use of what today is literally abandoned on dozens, hundreds, thousands, millions of hectares in one country alone,” Iancu told the Black Sea Forum for Renewable Energy.

He added that investments in energy efficiency and in sources of renewable energy remain attractive and are a top priority for investors. “Confirmed reserves stand at 186 trillion cubic meters of natural gas, enough to last for well over 54 years. There are 136 billion tons of oil, to last for well over 41 years, and 860 billion tons of coal, to last for the next 100 years,” Iancu stated. He added that the main challenges for renewable energy have to do with security, climate change and inequality.

In his turn, Doru Costea, secretary of state for global affairs within the Ministry of Foreign Affairs (MAE), expressed his appreciation for the financial sector’s interest in improving energy efficiency at global level. Doru Costea announced that EBRD will offer EUR 10 M, through loans given by BCR, in support of private companies in view of improving energy efficiency. Likewise, Alexandru Sandulescu, general manager within the Ministry of Economy, Commerce and Business Environment, announced that 300 files with a total value of EUR 1.6 bln have been received following the newest call for eco-innovative projects. Only EUR 190 M are currently available for these projects but another EUR 100 M will be allocated in 2011. The first edition of the Black Sea Renewable Energy Forum, organized with the participation of the Ministry of Economy, Trade and Business Environment and the Ministry of Foreign Affairs, is aimed at an overall view on policies dealing with renewable energy sources. The event joins major business people and relevant decision-makers, both Romanian and foreign, as well as government delegates from Black Sea countries and power companies operating or keen to invest in the region. 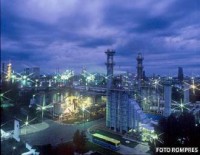