Gen. Jacob E. Smart, a four-star general who conceived the strategy for the daring World War II bombing raid on the oil refineries at Ploiesti, Romania, and went on to help shape the postwar Air Force, died Sunday in Ridgeland, S.C., in the house in which he was born. He was 97.The cause was congestive heart failure, his son, William, said.

In the face of protests by the five group commanders who would be leading the raid, his plan of flying at treetop level was accepted by Gen. Dwight D. Eisenhower, the supreme Allied commander. Among the plan’s advantages, Colonel Smart argued, was greater accuracy.

The mission, on Sunday, Aug. 1, 1943, was deemed a success, even though 54 of the 177 bombers that took part were lost, and 53 more were heavily damaged. The refineries’ output was greatly curtailed, and five Medals of Honor were awarded, the most for any single American military action.

Colonel Smart was not allowed to fly on the Ploiesti mission because his superiors thought his knowledge of Allied war plans and secrets was too great to risk his capture. But they later allowed him to fly 29 missions, the last of which resulted in his being shot down and put in a prisoner-of-war camp.

Through pictures in magazines showing Colonel Smart with President Franklin D. Roosevelt and Winston Churchill, the Germans realized that he probably knew things worth knowing, and he was repeatedly interrogated. Although Colonel Smart, unbeknown to the Germans, knew details of the Normandy invasion, he divulged nothing.

After the war, Colonel Smart became part of the new Air Force, which had been part of the Army. He rose rapidly in rank, becoming commander of the Fifth Air Force and of United States Forces in Japan. President John F. Kennedy, in a speech at the Air Force Academy on June 5, 1963, praised General Smart by name. The general was then commander in chief of the Pacific Air Forces.

In 1964, he became deputy commander in chief of the United States European Command, a post that involved personal dealings with President Charles de Gaulle of France, who sometimes deigned to speak in English to General Smart and who was then preparing to withdraw his forces from the North Atlantic Treaty Organization.

Jacob Edward Smart was born on May 31, 1909, in Ridgeland, and spent a year at the Marion Military Institute before being appointed to the United States Military Academy at West Point. After graduation, he completed pilot training and became a flight instructor, eventually rising to chief of flying training at the Air Corps Headquarters in Washington.

In July 1942, he was selected to serve on the Air Corps Advisory Council in Washington, which helped Gen. Henry H. Arnold, the corps commander, develop strategy. General Arnold sent him to London to help plan for the Ploesti raid.

In January 1943, Colonel Smart’s notion of a low-level attack was discussed at the meeting in Casablanca, Morocco, between Roosevelt and Churchill, and again that May when the two met in Washington.

It was General Arnold who finally agreed to let him fly. On May 10, 1944, Colonel Smart was blown out of the bomber he was piloting over Wiener Neustadt, Austria, and became a prisoner of war. Of the seven-man crew, only he and his bombardier survived. Colonel Smart was covered with shrapnel wounds.

When the Germans recognized him as being connected to higher-ups, their questions ranged far beyond details of his mission, and he was put in an excellent hospital and taken to country estates to socialize with the German elite, but he refused to talk meaningfully, his son said. He was once mysteriously approached by men who claimed to want to assassinate Hitler and begged him to help find American contacts.

After retiring from the Air Force in 1966, General Smart held several high positions at the National Aeronautics and Space Administration, where he worked on the Hubbell Space Telescope project, among other things.

General Smart’s marriage to Elizabeth Gohmert Melton of Scotts Valley, Calif., ended in divorce in 1946. His daughters Rosemary and Joan died before him.

In addition to his son, William Edward Smart, of Whitehall, Mont., General Smart is survived by his companion, Setsuko Saito; his daughter, Jacklyn S. Freeman of Ben Lomond, Calif.; 10 grandchildren; and 10 great-grandchildren.

When he retired for good to his hometown in the mid-1970s, he was greeted by three bands, and Main Street was renamed in his honor. He wrote a book about what local people did during World War II and helped set up a local historical museum.

FRIDAY, 12 JUNE 1942
MTO, HALPRO Detachment:
13 B-24’s of the HALPRO detachment (the bombing detachment for the China-Burma-India Theater) under command of Colonel Harry A Halverson enroute from US to China take off during the night of 11/12 Jun from Fayid, Egypt to bomb oilfields at Ploiesti, Romania. Only 12 attack at dawn; 4 of the 13 land at a base in Iraq which was designated for recovery of the flight, 3 land at other Iraq fields, 2 land in Syria, and 4 are interned in Turkey. Though damage to the target is negligible, the raid is significant because it is the first AAF combat mission in the European-African-Middle East (EAME) Theater in World War II, and the first strike at a target which later will be famous.

WEDNESDAY, 5 AUGUST 1942
MTO, US Army, Middle East Air Force (USAMEAF):
Lieutenant General Lewis H Brereton, in his first strategic estimate of the Middle Eastern war, indicates that the 3 major objectives for the Allied Air Forces are to assist in the destruction of General Erwin Rommel’s Afrika Korps by support to ground troops, secure sea and air communications on and over the Mediterranean, and carry out a sustained air offensive against Italy and against oil installations at Ploiesti, Romania and in the Caucasus, if the latter should fall under Axis control.

SUNDAY, 1 AUGUST 1943
EASTERN MEDITERRANEAN (Ninth Air Force):
In Romania, 177 B-24’s, of the IX Bomber Command (including B-24’s on loan from the Eighth Air Force) are dispatched to bomb oil refineries at Ploiesti and nearby Campina. The operation (TIDALWAVE) is costly, 54 planes and 532 airmen are lost, but damage to the targets is severe. 5 Medal of Honors are awarded for this mission.

TUESDAY, 6 JUNE 1944
STRATEGIC OPERATIONS (Fifteenth Air Force):
Shuttlebombing (Operation FRANTIC) continues as 104 B-17s and 42 P-51s (having flown to the USSR from Italy on 2 Jun) attack the airfield at Galati, Romania and return to Soviet shuttle bases; 8 enemy fighters are shot down and 2 P-51s are lost. 570+ other bombers, with fighter escort, hit targets from bases in Italy, i.e., in Yugoslavia, B-17s hit the Belgrade marshalling yard and Turnu-Severin canal installations, and in Romania, B-24s hit Ploiesti oil refineries and the marshalling yard at Brasov.

SATURDAY, 10 JUNE 1944
STRATEGIC OPERATIONS (Fifteenth Air Force):
P-51s and P-38s fly escort, and in Romania, strafe targets of opportunity between Bucharest and the Danube River and S of Craiova, and dive-bomb an oil refinery at Ploesti.

SATURDAY, 24 JUNE 1944
STRATEGIC OPERATIONS (Fifteenth Air Force):
335 bombers attack targets in Romania; B-17s attack the railroad bridge at Piatra; B-24s bomb the railroad repair depot at Craiova and oil refinery at Ploiesti; 33 P-51s sweep the Ploiesti-Bucharest area while other P-51s, P-38s, and P-47s fly 220+ sorties in support of the bombers; the bombers and fighters claim 20+ aircraft shot down; 10 US aircraft are downed and several others are missing.

SUNDAY, 9 JULY 1944
STRATEGIC OPERATIONS (Fifteenth Air Force):
In the Fifteenth’s first Pathfinder-led mission, 222 B-17s and B-24s bomb Xenia and Concordia Vega oil refineries at Ploiesti, Romania; P-38s and P-51s fly escort; other P-51s sweep the Ploesti area during the attacks; the bombers and fighters claim destruction of 14 of the 40-50 opposing fighters; 6 AAF aircraft are shot down. 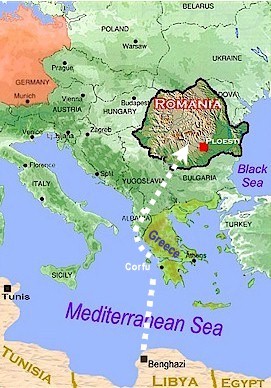 Gen. Jacob E. Smart, Ploiesti Raid Strategist, Dies at 97
By DOUGLAS MARTIN
Copyright New York Times November 16, 2006
Gen. Jacob E. Smart, a four-star general who conceived the strategy for the daring World War II bombing raid on the oil refineries at Ploiesti, Romania, and went on to help shape the postwar Air Force, died Sunday in Ridgeland, S.C., in the house in which he was born. He was 97.The cause was congestive heart failure, his son, William, said. 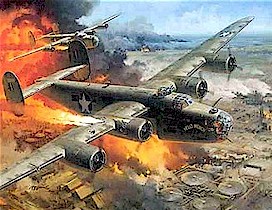 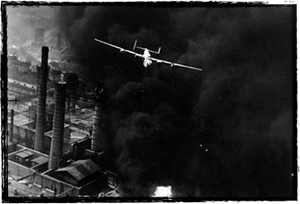