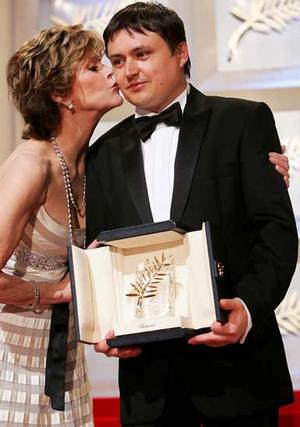 
A Romanian filmmaker telling one woman’s story has spoken for thousands on his way to the Palme d’Or.
Jane Fonda presents Romanian director Cristian Mungiu with the Palme d’Or.
The Cannes competition jury also awarded a special prize in honour of the festival’s 60th anniversary to Gus Van Sant.

The buzz on the Croisette in the last few days of the festival, when the frantic pace of the first week slowed to allow the occasional intake of breath, was that there were a few frontrunners from a strong field. The final choice, however, was confirmation of Romania’s no-budget film culture as the bold new voice in Europe.

Cristian Mungiu’s film about the experience of abortion, still used as a first-resort means of contraception in Romania, had overwhelmed audiences on the festival’s first full day of screenings with its emotional force and austerely disciplined visual style. The film also won the Fipresci prize, awarded by a committee of international critics.

Hundreds of thousands of women are said to have died having illegal abortions in Romania during the eccentrically repressive Ceausescu years, but Mungiu focuses on just one story, by no means the worst he could have chosen, to show what it meant to be driven underground for an operation in what was then a dismally poor country.

Cannes Film Festival 2007 (World Premiere Competition–It’s only Day One of the festival and Cannes is already a showcase for another stunning an revelatory work from Romania: 4 Months, 3 Weeks & 2 Days, the second feature of Cristian Mungiu. Exploring the private traumas of two women who undertake a perilous illegal action, it is a bruising, taut and wrenching social and moral portrait about loss and violation.

“Things are in a saddle and ride mankind,” Emerson said. The same is with national film movements. Modern art in postwar Eastern Europe is often contentious and brittle, punctuated by hope, tragedy and unfathomably restricted careers. The Polish school of anxiety or the Czech new miracle revealed many idiosyncratic and unclassifiable talents that exploded like rockets and then inexplicably was extinguished by institutional and political repression.

Now, suddenly, a most invigorated and revealing work is being done in Romania. The major discovery of Cannes two years ago was Cristi Piui’s astonishing The Death of Mr. Lazarescu. Last year Corneliu Porumboiu’s 12:08 East of Bucharest captured the Camera d’Or for best first feature.

Piui’s film was animated by a bleak and trenchant Eastern European mordant black comedy. Porumboiu’s tracked a different kind of social and political despair, done in an acid-black register of cultural and historical amnesia.

Mungiu’s probing and absorbing new work unfolds in nightmarish and bleak inferno that’s very convincingly drawn and realized. Set in 1987 at the end of the totalitarian regime of the dictator Nicolai Ceausescu, the film is culled from an ambitious project called Tales from the Golden Age that attempts to explore the perverse strangeness of communist rule. Mungiu eschews any opportunity to alleviate the social tension or dramatic intensity with stabs at humor. He remains throughout remarkably attuned to the interior lives of his two female protagonists, and the movie’s intensity and dramatic conviction are forcefully registered in their anguish and torment.

Two attractive undergraduate students, Otilia (Anamaria Marinca) and Gabita (Laura Vasiliu), share a space at a university dormitory in a provincial Romanian town. At the start the camera tracks and swoops down the narrow corridors and the sense of entrapment is pungent and unyielding. Every act is a personal moment of negotiation, for privacy, riding a train without a ticket, securing the preferred brand of cigarettes or haggling over the price of a hotel room. The atmosphere is bleak and unyielding, the movie drained of any primary colors and the setting dramatized by a preternatural gray sharply rendered by Mungiu and his talented cinematographer Oleg Mutu.

The talk between the two women is oblique and uncertain. Blond, direct and forceful, Otilia is clearly more confident and aggressive in her actions. The darker Gabita appears far more uncertain, hesitant and reliant on her friend. In the opening half hour, the early scenes dealing with money and Otilia’s efforts to secure a private hotel room, Mungiu expertly withholds just enough information to maintain a strange and discomfiting tone of underground, perhaps, illicit activity.

It yields the movie’s most remarkable and sustained sequence inside the hotel room where Otilia and Gabita nervously negotiate with the strange, mysterious Bebe (Vlad Ivanov), a back alley abortionist who has been enlisted to terminate Gabita’s unwanted pregnancy. The earlier forms of negotiation between public and black market operatives is now directed in the most private of realms involving Gabita’s body. Abortion was declared illegal in 1966, and many young women are forced to make horrible and wrenching decisions.

As the three nervously dance and pirouette around each other, the moral and personal dilemmas are exposed and the vulnerability of the two women and their dependence on Bebe carries tremendously difficult reverberations. Mungiu’s use of restricted space is tense and involving, annotating each movement, reaction and vocal inflection with a nervous intensity that verges constantly on breakdown and violence.

Ivanov is a remarkable actor, playing the kind of sexual opportunist who uses his power and advantage to bleakly gratifying ends. In a movie of many shocking moments, of imagery that sears and ruptures, the most unsettling is the image of Otilia, naked from the waist below, entering the bathroom after she has given into his sexual demands.

The violation is experienced by both women. Mungiu makes the difficult though complex and daring decision of privileging Otilia’s point of view. In shifting the range of feelings of guilt, anger, shame and humiliation, Otilia explicitly acknowledges the innate suffering and loss of identity repeatedly imperiling young women like her and Gabita. Momentarily slipping away from the hotel to meet the family of her boyfriend, she is subjected to further levels of humiliation and class grievances. Luminita Gheorghiu, memorable as the paramedic from Lazarescu, turns up in a small and pivotal part as the mother of Otilia’s boyfriend whose birthday occasions the off-putting celebration.

4 Months, 3 Weeks & 2 Days pivots on all manner of powerlessness and the loss of humanity. Mungiu sharply evokes the constant Stalinesque spectre of living under surveillance. Most unnerving every moment in the film arouses some brand of suspicion, about activity, feeling and movement that the smallest of gestures carry the threat of being watched over, judged or humiliated.

Refreshingly and bravely, Mungiu never provides a context or reason for Otilia’s motives. The movie is not about expiation of sins but a very different kind of consequence. Near the end the movie has a chilling and ambiguous image that could be ready many different ways, a critique of Gabita’s ease of resolve or a moral lament for a life prematurely ended. The power is unflinching and considerable. It ends on a sustained and bravura tracking shot that follows Otilia carrying out one telling act for her friend, a movement that moves deeper and deeper into her own heart of darkness.

Emotionally, the movie demands an actress of toughness, verge and resiliency. Marinca gives an astonishing performance, tough, fearless and open.

4 Months, 3 Weeks & 2 Days is not an easy work–it’s terrifying, gripping, and devastating. Never punishing or too cruel to experience, the movie considers a wholly different moral and emotional demand, and it quite unflinchingly draws out the limitations, randomness, and cruelty of modern life. 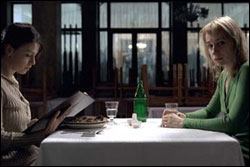