The making of “HILL 789: The Last Stronghold” – Romania in World War One

The Making of “HILL 789: The Last Stronghold” – Events
August 2003 – During a business trip to Bacau with American business clients, I took the opportunity to detour to Oituz. Catalin Mardare, the County Prefect, called on the Mayor of Oituz/Grozesti to show me the site of the Cosna battle. Meeting him we follow him up into the hills along dirt roads and reach the monument to the Hill 789 events in WW-I. This is clearly a strategic point facing west into the Carpathian valley that was the entry point for the Alpen Korps and the Wurttemberg regiment.

March 2005 – Founder of the Romanian Boy-scouts in 1913 modeled on Lord Baden-Powell‘s movement, my father’s illustrated diaries are a unique personal insight into Romania’s entry into WW-I in August 1916. They become the first inspiration to create a documentary on the War.

December 20, 2007 – My son, Nicholas, and I sit down and write a one page outline of a documentary production based on my father’s memoirs and experiences including his involvement with Col. Norton Griffiths (sabotage of Ploesti oil) and fighting against Lt. Erwin Rommel on the Romanian front. We decide to call it Hill 789.

January 2008 – At the Romanian Embassy in Washington, I meet violinist Sherban Lupu. During a coffeee break, he hears about the “Hill 789” project and agrees to collaborate on the musical score. His grandfather was a WW-I veteran.

February 2008 – To confirm my father’s Military Cross award by the British, I search in vain for the record. While on a trip to London, I plan a visit to the National (Military) Archive at Kew. I am fortunate to have Col. Michael Carrington with me. Together we search through all detailed listings of MC awards of that period and find nothing. As a last resort, he asks for an expert and by chance an elderly retired archivist on volunteer duty knows exactly where Romanian award winner listings are. An hour later the documents arrive with confirmation – including a list of 55 other Romanian Military Cross winners.

April 2008 – Visiting the Stuttgart Archives where the Wurttemberg Regiment records are kept, I find Rommels’ hand-drawn Hill 789 maps and 100 pages of his personal notes on the two-week ‘Last Stronghold’ battle.

May 13, 2008 – Meeting in Chapel Hill, North Carolina, with artist George Pratt to discuss the project. He agrees to create graphic work for the documentary. George Pratt in front of his 1939 Hudson and with Nicholas Dimancescu in Chapel Hill.

July 23-26, 2008 – Nicholas Dimancescu attends San Diego Comic Con with 150,000 other enthusiasts. The purpose is to see and meet graphic novel and animation personalities.

August 13-14, 2008 – Visit with George Pratt in Chapel Hill, NC, to brainstorm ideas and to plan his first visit to Romania in September.So

October 3, 2008 – In Seattle, Oregon, interview with Prof. Glenn Torrey, University of Washington historian and specialist on Romanian’s role in WW-I. 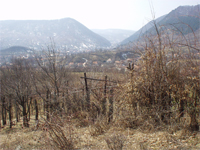 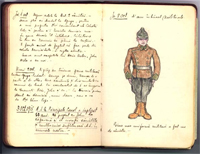 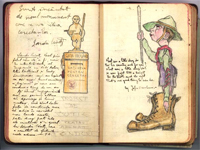 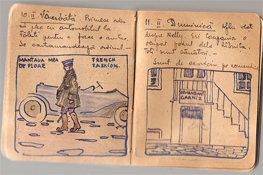 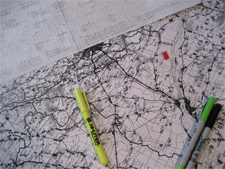 Click on left photo for more images of Military Museum