A conversation in the U.S. about Romania’s role in WW I is usually followed by a surprised “I didn’t know that.”  This response first to the fact that there was indeed an ‘Eastern Front’ and then the fact that the nation suffered 535,000 casualties fighting on the Allied side. This amounted to almost 18% of the total male population* of Romania at the time.

After two years of neutrality, King Ferdinand, heavily influenced by Queen Marie granddaughter of Queen Victoria of England, declared war against the Central Powers (Germany, Austria, Hungary, Bulgaria, Turkey) in August of 1916.  Prior to that time his predecessor King Carol I had persuaded himself that Kaiser Wilhelm would bring quick victory to himself when he declared war against the Allies. His advisor Take Ionescu wrote of this period: ” So little did King Charles believe in the possibility of resisting Germany, that some days after the famous Crown Council [August 3, 1914] he was at pains to inform me exactly how the war would develop. According to him, it was to last, at the most until December, and in January, if not sooner, the Peace Conference, which would change the organisation of the world from top to bottom, would be called together.”**

What happened instead was eventual victory for the Allies and both the defeat and dismemberment of the Austro-Hungarian Empire and final demise of Turkish power. Romania’s territorial gains were substantial including Transylvania, Bessarabia, and small portions of upper Bulgaria.

The events of the war deteriorated fast after false starts by the Romanian army (supported by substantial divisions from Tsarist Russia). An attempt to cross the Danube River in the first months of the war to halt German, Bulgaria and Turkish military movement failed.  After initial successes, so did major attempts to cross the Carpathian Mountains and push Austro-Hungarian armies westward.

What soon followed were major movements from German-led armies from the south (350,000 strong) and from the west (also 350,000 strong) crossing over the Carpathians into Wallachia. Under such pressure, Romanian and Russian armies retreated northward into Moldavia. Bucharest was abandoned and the King and Government established themselves in Moldavia’s capital city, Iasi.  Romanian gold stocks were sent for safety into Tsarist Russia. Reclaimed but never returned, this remained a contentious issue with the Soviet Union and to this day with Russia.

In November of 1916, British military were sent ahead of invading troops on a secret mission to destroy oil stocks and sabotage oil wells in Ploesti.  This was successfully accomplished – much to the dismay of the Germans who had made control of Romanian oil a strategic focus of their invasion. Romania was then Europe’s leading producer of oil. [NOTE – The sabotage effort included my father, Dimitrie Dimancescu, who was later awarded the Military Cross by British Royal Decree.]

Pushed by invading armies moving northward and eastward across the Carpathians into Moldavia, a front was established with the town of Marasesti as a focal point. By then the Romanian army, itself reorganized and better equipped under the guidance of the French General Henri Mathias Berthelot, were able to hold their ground. The battles of Marasesti in July of 1917 and nearby Oituz in August are considered significant victories in that they established and held the front against substantial but overstretched German, Austrian, Hungarian forces. Oituz, a town at a strategic valley entrance, was significant for battle events covering several weeks in August including attacks by troops led by then Lt. Edwin Rommel. The Cosna Hill battle marked a key moment in preventing access to the Moldavian plains by Austro-Hungarian troops attempting to advance from Transylvania.  [NOTE – Here too my father’s Hunters Regiment gained notoriety and coveted Mihai Viteazul medal awards for attacking and holding this strategic pass.]

But the Russian Revolution in October of 1917 undermined these successes when Russian troops quickly and chaotically abandoned their positions. An armistice was called between Romania and Germany and troops were demilitarized though King Ferdinand refused to sign Treaty terms Germany tried to impose on Romania.  French armies would eventually cross the Danube and enter Bucharest in November of 1918 hours after German troops abandoned the city. The King returned on November 30th.

What was the broader significance of Romania’s role in World War 1?  First it severely undermined Germany’s thirst for oil by preventing access to the supplies and well production at a critical time in the war.  Second, it maintained and held the Marasesti Front from August 1917 until December of that year thus forcing Germany to keep substantial forces engaged and away from the Western Front.  Both circumstances can be viewed as critical contributions to Germany’s eventual defeat in the so-called “Great War.’

And for Romania it meant its enlargement and the fulfillment of a long-held dream of uniting Wallachia, Moldavia and Transylvania into a single Romanian entity. (See December 1)

King Ferdinand and Queen Marie who is credited with influencing her husband to side with the Allies in WW I. She lobbied Romanian interests during the Peace process. 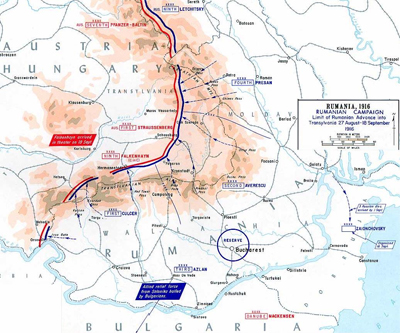 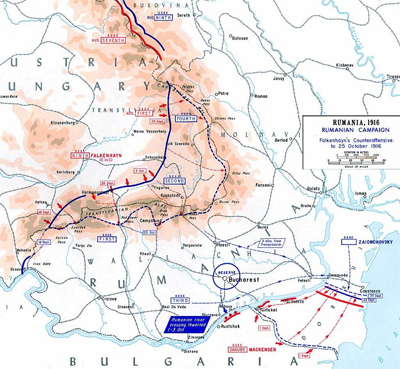 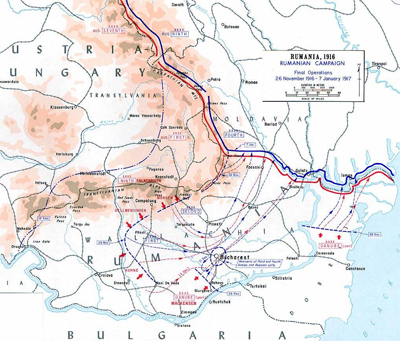