Many art historians consider Constantin Brancusi’s “Endless Column” (1938), designed to memorialize Romanian soldiers killed in World War I, the quintessential example of Modernist sculpture. Made from 17 cast-iron pieces stacked a soaring 96 feet high, it was built, as Brancusi put it, “to support the vault of heaven.”


“Endless Column” still stands in Tirgu Jiu, Romania. But through July 1 a rendition of it is also on display at the Studio Museum in Harlem, where the installation “Philosophy of Time Travel” reimagines Brancusi’s sculpture as if it had been launched like a missile from its home, crossed the Atlantic and crashed into the Studio Museum’s exhibition space. It’s the work of five artists based in Los Angeles who studied together at California Institute of the Arts — Edgar Arceneaux, Vincent Galen Johnson, Olga Koumoundouros, Rodney McMillian and Matthew Sloly — and want to play with our experience of time and history.

The artists’ renderings of how the sculpture got to Harlem are displayed in the exhibition’s catalog in drawings that look like video-game animation sequences; they are eerily reminiscent of images of the 9/11 airplanes at the moment of contact with the World Trade Center.

According to a roundtable discussion included in the catalog (and, in part, on the gallery walls), the concept for “Philosophy of Time Travel” began not with a desire to recall acts of recent terrorism, but with a wish to create an installation that would symbolize the clash of African and Western cultures, a concept the artists thought appropriate for an exhibition at the Studio Museum.

At first they considered displaying a Doric column (an emblem of Greek humanism) that had been smashed to smithereens by an Egyptian pyramid (to their minds a pan-African symbol). Egypt reminded one of the artists of Sun Ra, the African-American musician who combined Egyptology with space-age spiritual philosophies in his cosmic jazz.

Sun Ra’s ideas about space exploration (he claimed to have been descended from the inhabitants of Saturn) led them to “Donnie Darko” (2001), a film that involves giant rabbits, hallucinatory travels through time and space, a plane crash in which an engine falls out of the sky and lands on the roof of a house, and a book titled “Philosophy of Time Travel.”

The artists can’t agree on the moment they decided to use Brancusi’s sculpture instead of the column and pyramid, but they all agree that their goal was to strip it from its context as a Modernist World War I memorial and drop it into a different time and space: to present new, liberating meanings and the possibility of nonstandard histories.

The results are seven rhomboids, about the same size as the original, which appear to have torn through the gallery’s ceiling, splintered the surrounding drywall and smashed into the floor, tearing the wooden floorboards into shreds. The giant forms are painted to resemble the cast-iron original and carved to look as if they have traveled at high speeds through space. The ones that have hit the floor resemble the front end of a totaled car.

The collective succeeds in ridding “Endless Column” of its Modernist sanctity by turning it into something more akin to a Hollywood blockbuster than a memorial sculpture. The rhomboids, made of Styrofoam cubes covered with fiberglass and enamel paint, give the piece the look of a film prop. From one angle, the installation recalls the man-eating tyrannosaurus in Steven Spielberg’s “Jurassic Park.”

“Philosophy of Time Travel” seems to be more of a remix than a rupture: the obvious themes of the destruction of the father (here symbolized by Brancusi’s masterpiece) and the vandalism of the museum are both well-traveled artistic devices. Though the references to Sun Ra and “Donnie Darko” in the catalog sound intellectually compelling, they don’t really show up in the installation, a problem that will probably leave viewers adrift as to the artists’ intentions.

The biggest problem that derails this exhibition, however, is one that the artists probably should have foreseen: the power of Brancusi’s forms to remain his, despite manipulation. As the poet Audre Lorde wrote, “the master’s tools will never dismantle the master’s house.” 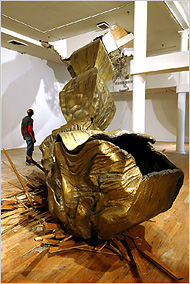