The collapse of the long-planned NABUCCO pipeline has forced authorities in Bucharest to focus on gigantic projects that can strengthen energy security of the country. One of these is the AGRI pipeline system and terminals for liquefaction or regasification, linking the port of Constanta to source gas from Azerbaijan, Georgia-Black Sea route. Specifically, the gas in Azerbaijan, a country with a huge potential for hydrocarbons will be transported to the Port of Batumi in Georgia by pipeline.

The Arad-Szeged natural gas pipeline was inaugurated in the presence of the Prime Ministers of Romania and Hungary and of the European Commissioner for Energy Gunther Oettinger.
The pipeline connects the Romanian natural gas transportation network to the rest of Europe, making our country no longer exclusively dependent on the Russian natural gas transported through Ukraine. According to Realitatea.net, “trial” quantities of natural gas have already been imported. For the time being the pipeline’s flow will run from Hungary towards Romania, with our country set to be technically able to export natural gas through this pipeline in several years’ time. Romania has been importing natural gas exclusively from Russia through Ukraine since 1979, through two pipelines that enter the country at Isaccea (Tulcea County) and Mediesu Aurit (Satu Mare County). This pipeline was planned as an alternative to importing natural gas from Russia and is at the same time Romania’s first project concerning pipeline interlink with neighbouring countries. Nevertheless, Yvonnick David, general director GDF SUEZ Energy Romania, one of the companies that have reserved transport capacity through this pipeline, recently stated that the Arad-Szeged pipeline will be supplied with Russian natural gas. The interlink pipeline has a length of 62 kilometres on Romanian soil, from the link point in Horia (near Arad) to the Nadlac (Csanadpalota) border crossing point on the Romanian-Hungarian border.

According to Transgaz officials, the Arad – Szeged pipeline has a capacity of 4.4 billion cubic meters per year, or an average 500,000 cubic meters per hour. The project has an estimated value of EUR 68.2 M, of which 48 per cent represent Transgaz’s contribution. OMV Petrom, E.ON, GDF SUEZ Energy Romania and MOL Energy Trade have reserved import capacity on the Romanian side of the pipeline. GDF SUEZ, MOL, E.ON and EconGas have reserved export capacities on the Hungarian side of the pipeline.

Romania imports from Russia, through intermediaries, approximately one third of the natural gas it consumes. Romania consumes approximately 17-18 billion cubic meters of natural gas every year. Of those, approximately two thirds are covered by OMV Petrom (owned by Austria’s OMV) and Romania’s state-owned Romgaz. Following a conflict with Ukraine, Gazprom, Europe’s main supplier of natural gas and the largest natural gas producer in the world, suspended its deliveries on January 1, 2009 for almost three weeks, a move that led to a veritable “gas crisis” in the region. During that period Romania tapped into its natural gas reserves and used crude oil as a substitute for Russian natural gas.

In 2010 GDF Suez SA (France) could join the six companies that are currently part of the consortium. rThe first natural gas deliveries could start in 2014. The Russian Federation opposes the Nabucco project, proposing the South Stream pipeline instead.

The participation within the Nabucco project will be finalized in 2010 and the actual construction works will start in 2011, the spokesperson of the future European natural gas pipeline’s international consortium, stated.

Six companies are currently members of the Nabucco Gas Pipeline International GmbH consortium, each holding 16.7 per cent of the shares: Botgas (Turkey), Bulgargaz (Bulgaria), Transgaz (Romania), MOL (Hungary), OMV (Austria) and RWE (Germany). France’s GDF Suez SA has expressed its interest in taking part in Nabucco’s construction but the final decision will be taken next year depending on whether Turkey and France agree on their interests.

The agreement between Nabucco’s transit states was signed in July after several months of negotiations and after the European Union accepted to integrate this project as a priority within its energy strategy.

According to Reinhard Mitscheck, the general director of the Nabucco Gas Pipeline International, Nabucco has started advanced negotiations with the European Investment Bank (EIB) and the European Bank for Reconstruction and Development (EBRD) in order to establish the project’s financing conditions, with talks set to start with the International Financial Corporation (IFC).

Nabucco will need a varied group of creditors, including international financial institutions, credit export agents and commercial banks. The European Union’s support through the European Energy Program for Recovery (EEPR) will represent an important contribution towards ensuring the needed financing. Moreover, the six consortium partners will contribute their capital to financing the project.

The main goal of the natural gas pipeline that will run from the Turkish-Georgian and Turkish-Iranian borders to Central Europe will be to supply the Eastern and Central European states. The pipeline will have a length of 3,300 kilometers and an estimated cost of EUR 8 bln. According to the EC, 50 per cent of Nabucco’s throughput will be sold on the free market, with the rest set to be reserved in the account of the pipeline’s owners. The sources of supply will be assured by Central Asian states such as Azerbaijan but also probably by Iraq and Iran.

If the construction works start in 2011 the first quantities of natural gas will be delivered starting in 2014 and the throughput will reach its maximum level in 2018-2020.

The project’s essential goal is to reduce the EU states’ dependence on energy supplies from the Russian Federation, a state that currently covers 40 per cent of EU’s natural gas imports. The Russian Federation continues to oppose the project, proposing the South Stream natural gas pipeline that will be built by Russia’s Gazprom and Italy’s ENI as an alternative.

For Romania constructing Nabucco would represent the attainment of the strategic goal of energy independence considering that approximately 25 per cent of the annual natural gas consumption is covered by imports from the Russian Federation. 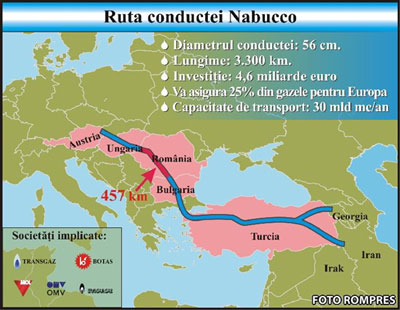