The companies that submitted binding offers are: Electrabel Belgium, Enel Italy, Iberdola Spain, CEZ from the Czech Republic, Arcelor-Mittal from Romania and RWE from Germany.

Nuclearelectrica announced on Thursday the end of the period of submitting binding offers for building and comissioning of units 3 and 4 from Cernavoda. Therefore, the companies that submitted binding offers are: Electrabel Belgium, Enel Italy, Iberdola Spain, CEZ from the Czech Republic, Arcelor-Mittal from Romania and RWE from Germany.

The process of selecting the investors for the finalisation of the CNE Cernavoda Units 3 and 4 project will continue with an analysis of the offers received by the negotiation committee, so that the result of the selection would be announced by end of November. The realisation of the two units implies investments of about EUR 2.3 billion, and each of the two reactors is going to have an installed power of 720 MW. The government strategy regards the finalisation of the process of attracting investors and registering a new society dedicated to Units 3 and 4 from the beginning of the year 2008, so that the actual works would start during the same year.

The putting into operation of Units 3 and 4 is expected for 2014 and respectively for 2015. Their construction is going to be realised by transparent attraction of private capital, of companies with reliability and financial force, disposed to associate with Nuclearelectrica in order to finalise and operate the power objective.

BUCHAREST, Aug. 3, 2007 (Thomson Financial delivered by Newstex) — The Romanian government has launched a new tender for bids for construction of the third and fourth phases of the nuclear power station at Cernavoda, which could go onstream around 2014-2015, the economy ministry said.

Potential bidders have until Oct 25 to hand in their bids, the ministry said.

The government had launched an initial tender in spring 2006 and indicated that 16 companies, including Enel SpA, E.ON AG (NYSE:EON) , Iberdrola and RWE, as well as a consortium between Canada’s EACL and Italy’s Ansaldo, had expressed interest.

The consortium has already built the first two reactors for the power station.

The authorities had to re-start the tendering procedure after a change in government strategy over the financing of the project.

In a feasibility study carried out by Deloitte and Touche, the most economically viable scenario would be to build the two phases at the same time, and the costs are estimated at 2.2 bln eu

ALSO: Link to fact sheet on CANDU and CERNAVODA

From CANDU Owners Group, Inc (Canada):
This is the only nuclear power station in Romania and the only CANDU reactor operating in Europe. The owner and operator is the Romanian nuclear state utility, Societatea Nationala Nuclearelectrica.
Cernavoda Unit 1 supplies more than 10% of Romania’ s electricity demand. In addition Unit 1 supplies 60-80 Gcal annually for the heating of the town of Cernavoda.
Cernavoda Unit 2 will add 8% after 2007 opening. The work is lead by SNN’s traditional partners, AECL Canada and Ansaldo Italy. 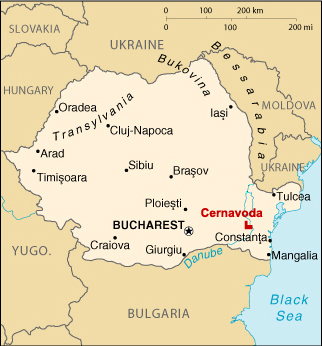 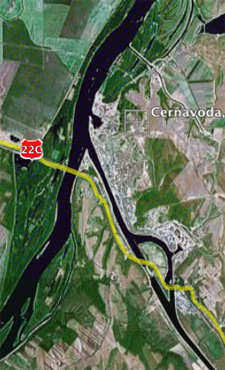