Spark plug, the device producing the necessary spark ignition engines, fuel explosion could be replaced by lasers that will increase performance and engine efficiency and eliminate problems of wear. Romanian and Japanese scientists announced that work on a project about which the English press has written extensively. The solution is to be done by laser ignition of ceramics that can be constructed at a lower price and with the advantage that switching will be faster.

The project started in 2008 and national partners were the University Politehnica Bucharest – Faculty of Applied Sciences, University of Pitesti, Faculty of Mechanics and Technology Setcar SA.

The spark plug is a device for producing electrical spark igniting the fuel mixture in the cylinder of internal combustion engines. In the 150 years since the operating principle has not changed much.

However, the development by the Roman-Japanese team promises – at least in theory – to revolutionize the auto industry by eliminating wear problems occurring during the spark plugs as well as those related to heavy firing on very cold days. The solution provides simultaneous trimterea two – three mid-air mixture in which laser – fuel, ignition to make so much faster, in nanoseconds instead of milliseconds, and symmetrically, from classical plug.

The research team now says he has found a way to produce low-cost and efficient laser compact enough to make lighting more efficient but also to reduce emissions of the car. It is in talks with auto parts maker Denso.

Another benefit you and the whole system of lasers that can be produced from ceramics, such as if there will be large volumes, the costs can be greatly reduced.

Another problem can be solved by the fact that you wear that occurs in classic spark plugs electrodes is used more often as not be a problem in performing laser ignition system by concentrating optical energy and does not require electrodes.

The research was conducted by the National Institute for Lasers, Plasma and Radiation Physics (Romania), Institute for Molecular Science (Japan) and Nippon Sōken, Inc.. 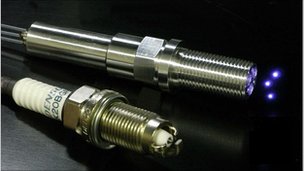