Joseph Juran – Famed Quality Guru (1905-2008)
Comments by Dan Dimancescu Romanian-born in Braila, Joseph Juran pioneered quality-management practices in the United States and remained active until the age of 100. Along with W. Edwards Deming, he brought fundamental change to the way in which corporations went about delivering quality (not to be confused with luxury) to its customers. The pair, of which Juran was the more intellectual, were instrumental in turning the Japanese manufacturing sector – and thereby its basic economy – into becoming world class competitors. Toyota became the star performer. For the general reader of business books, Juran’s “A History of Managing for Quality” (ASQC-Quality Press, 1995) is highly recommended in providing a historic overview of management know-how from ancient China, to Venetia, to present day examples.

My own work for many years as a management consultant made use of his practices and more specifically his famed 80-20 Pareto principle. Put colloquially, there is always one a small set (20%) of causes for 80% of the problems. This allowed one to better diagnose and better focus on high-leverage solutions. He pioneered, too, the famed Six-Sigma concept that was first embraced corporate-wide by GE and helped explain that company’s own success in supplying high-quality products to its customer. His obituary, as it appeared in the NYTimes, follows.

Joseph M. Juran, who helped establish the field of quality management and wrote the “Quality Control Handbook,” which taught manufacturers worldwide how to be more efficient and productive, died Thursday in Rye, N.Y., where he lived with his wife of 81 years, Sadie. He was 103. The cause was an apparent stroke, said his grandson, David Juran, a professor at the Columbia University Business School.

Mr. Juran’s work in quality management led to the development of the widely practiced business methodologies referred to as Six Sigma and lean manufacturing. He founded the Juran Institute, a training and consulting firm in Southbury, Conn.

“Everybody who’s in business now adopts the philosophy of quality management,” David Juran said. “He came along at just the right time. Most of the reference books that have been written about this field are either books that he wrote or imitations.”

Among his best-known works were the “Quality Control Handbook” in 1951, the first mathematically rooted textbook on product quality, now entering its sixth edition, and “Managerial Breakthrough” in 1964, which described a step-by-step improvement process that inspired the Six Sigma and lean manufacturing philosophies.

Recently, Mr. Juran was working on an updated edition to another of his books. David Juran and Joseph De Feo, the Juran Institute’s chief executive, said they planned to finish the book.

“His belief was that you always have a project to keep your mind going,” Mr. De Feo said. “He always had something to do.”

His first job after college, in 1924, was inspecting products for defects at the Western Electric Company, the former manufacturing division of AT&T. It was there that he wrote his first quality control text, a training pamphlet on which the “AT&T Statistical Quality Control Handbook” was based.

During World War II, Mr. Juran led a team in Washington that hastened shipments of supplies to allies overseas.

In 1954, at the invitation of the Union of Japanese Scientists and Engineers, he traveled to Japan and introduced the country’s fledgling manufacturing industry to the concept of quality control. The principles that he taught helped many companies there, like the automaker Toyota Motor, ultimately become global leaders in their industries.

In 1979, at the age of 75, Mr. Juran founded the Juran Institute. “He wrote that the purpose of the institute is to improve the quality of society,” an attitude that he thought all businesses should adopt, said Mr. De Feo. “He said, ‘Whatever you do make sure it improves society. Don’t just do it for the sake of profit.’ ”

Mr. Juran remained actively involved with the institute even after his official retirement in 1994. A celebration of the institute’s 25th anniversary also served as his 100th birthday party, with a cake decorated to resemble a stack of books he had written.

“He never really made a distinction between work and leisure. He enjoyed his work so much that any time he had he spent working,” David Juran said. “To him there was no such concept as retirement or a day off.”

David Juran said his grandfather envisioned quality management becoming a field with the same type of recognition as accounting and economics, with academic degrees and professional certifications.

In a Public Broadcasting System documentary about Mr. Juran called “An Immigrant’s Gift,” Peter Drucker, the late author and management consultant, said Mr. Juran’s influence on the nation’s industrial economy could not be overstated.

“Whatever advances American manufacturing has made in the last 30 to 40 years,” Mr. Drucker said, “we owe to Joe Juran and to his untiring, steady, patient, self-effacing work.”

Mr. Juran is survived by his wife, Sadie; his children, Donald, Charles, Robert and Sylvia; 9 grandchildren; and 10 great-grandchildren. 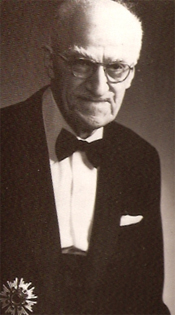