Economist Georgescu-Roegen in NYT re Evolutionary Theory of Economics

INNOVATIVE and opaque instruments of debt; greedy bankers; lenders’ eagerness to take on risky loans; a lack of regulation; a shortage of bank liquidity: all have been nominated as the underlying cause of the largest economic downturn since the Great Depression. But a more perceptive, and more troubling, diagnosis is suggested by the work of a little-regarded British chemist-turned-economist who wrote before and during the Great Depression.

Frederick Soddy, born in 1877, was an individualist who bowed to few conventions, and who is described by one biographer as a difficult, obstinate man. A 1921 Nobel laureate in chemistry for his work on radioactive decay, he foresaw the energy potential of atomic fission as early as 1909. But his disquiet about that power’s potential wartime use, combined with his revulsion at his discipline’s complicity in the mass deaths of World War I, led him to set aside chemistry for the study of political economy — the world into which scientific progress introduces its gifts. In four books written from 1921 to 1934, Soddy carried on a quixotic campaign for a radical restructuring of global monetary relationships. He was roundly dismissed as a crank.

He offered a perspective on economics rooted in physics — the laws of thermodynamics, in particular. An economy is often likened to a machine, though few economists follow the parallel to its logical conclusion: like any machine the economy must draw energy from outside itself. The first and second laws of thermodynamics forbid perpetual motion, schemes in which machines create energy out of nothing or recycle it forever. Soddy criticized the prevailing belief of the economy as a perpetual motion machine, capable of generating infinite wealth — a criticism echoed by his intellectual heirs in the now emergent field of ecological economics.

A more apt analogy, said Nicholas Georgescu-Roegen (a Romanian-born economist whose work in the 1970s began to define this new approach), is to model the economy as a living system. Like all life, it draws from its environment valuable (or “low entropy”) matter and energy — for animate life, food; for an economy, energy, ores, the raw materials provided by plants and animals. And like all life, an economy emits a high-entropy wake — it spews degraded matter and energy: waste heat, waste gases, toxic byproducts, apple cores, the molecules of iron lost to rust and abrasion. Low entropy emissions include trash and pollution in all their forms, including yesterday’s newspaper, last year’s sneakers, last decade’s rusted automobile.

Matter taken up into the economy can be recycled, using energy; but energy, used once, is forever unavailable to us at that level again. The law of entropy commands a one-way flow downward from more to less useful forms. An animal can’t live perpetually on its own excreta. Neither can you fill the tank of your car by pushing it backwards. Thus, Georgescu-Roegen, paraphrasing the economist Alfred Marshall, said: “Biology, not mechanics, is our Mecca.”

Following Soddy, Georgescu-Roegen and other ecological economists argue that wealth is real and physical. It’s the stock of cars and computers and clothing, of furniture and French fries, that we buy with our dollars. The dollars aren’t real wealth, but only symbols that represent the bearer’s claim on an economy’s ability to generate wealth. Debt, for its part, is a claim on the economy’s ability to generate wealth in the future. “The ruling passion of the age,” Soddy said, “is to convert wealth into debt” — to exchange a thing with present-day real value (a thing that could be stolen, or broken, or rust or rot before you can manage to use it) for something immutable and unchanging, a claim on wealth that has yet to be made. Money facilitates the exchange; it is, he said, “the nothing you get for something before you can get anything.”Problems arise when wealth and debt are not kept in proper relation. The amount of wealth that an economy can create is limited by the amount of low-entropy energy that it can sustainably suck from its environment — and by the amount of high-entropy effluent from an economy that the environment can sustainably absorb. Debt, being imaginary, has no such natural limit. It can grow infinitely, compounding at any rate we decide.

Whenever an economy allows debt to grow faster than wealth can be created, that economy has a need for debt repudiation. Inflation can do the job, decreasing debt gradually by eroding the purchasing power, the claim on future wealth, that each of your saved dollars represents. But when there is no inflation, an economy with overgrown claims on future wealth will experience regular crises of debt repudiation — stock market crashes, bankruptcies and foreclosures, defaults on bonds or loans or pension promises, the disappearance of paper assets.

It’s like musical chairs — in the wake of some shock (say, the run-up of the price of gas to $4 a gallon), holders of abstract debt suddenly want to hold money or real wealth instead. But not all of them can. One person’s loss causes another’s, and the whole system cascades into crisis. Each and every one of the crises that has beset the American economy in recent years has been, at heart, a crisis of debt repudiation. And we are unlikely to avoid more of them until we stop allowing claims on income to grow faster than income.

Soddy would not have been surprised at our current state of affairs. The problem isn’t simply greed, isn’t simply ignorance, isn’t a failure of regulatory diligence, but a systemic flaw in how our economy finances itself. As long as growth in claims on wealth outstrips the economy’s capacity to increase its wealth, market capitalism creates a niche for entrepreneurs who are all too willing to invent instruments of debt that will someday be repudiated. There will always be a Bernard Madoff or a subprime mortgage repackager willing to set us up for catastrophe. To stop them, we must balance claims on future wealth with the economy’s power to produce that wealth. How can that be done?

Soddy distilled his eccentric vision into five policy prescriptions, each of which was taken at the time as evidence that his theories were unworkable: The first four were to abandon the gold standard, let international exchange rates float, use federal surpluses and deficits as macroeconomic policy tools that could counter cyclical trends, and establish bureaus of economic statistics (including a consumer price index) in order to facilitate this effort. All of these are now conventional practice.

Soddy’s fifth proposal, the only one that remains outside the bounds of conventional wisdom, was to stop banks from creating money (and debt) out of nothing. Banks do this by lending out most of their depositors’ money at interest — making loans that the borrower soon puts in a demand deposit (checking) account, where it will soon be lent out again to create more debt and demand deposits, and so on, almost ad infinitum.

One way to stop this cycle, suggests Herman Daly, an ecological economist, would be to gradually institute a 100-percent reserve requirement on demand deposits. This would begin to shrink what Professor Daly calls “the enormous pyramid of debt that is precariously balanced atop the real economy, threatening to crash.”

Banks would support themselves by charging fees for safekeeping, check clearing and all the other legitimate financial services they provide. They would still make loans and still be able to lend at interest “the real money of real depositors,” in Professor Daly’s phrase, people who forgo consumption today by taking money out of their checking accounts and putting it in time deposits — CDs, passbook savings, 401(k)’s. In return, these savers receive a slightly larger claim on the real wealth of the community in the future.

In such a system, every increase in spending by borrowers would have to be matched by an act of saving or abstinence on the part of a depositor. This would re-establish a one-to-one correspondence between the real wealth of the community and the claims on that real wealth. (Of course, it would not solve the problem completely, not unless financial institutions were also forbidden to create subprime mortgage derivatives and other instruments of leveraged debt.)

If such a major structural renovation of our economy sounds hopelessly unrealistic, consider that so too did the abolition of the gold standard and the introduction of floating exchange rates back in the 1920s. If the laws of thermodynamics are sturdy, and if Soddy’s analysis of their relevance to economic life is correct, we’d better expand the realm of what we think is realistic.

Eric Zencey, a professor of historical and political studies at Empire State College, is the author of “Virgin Forest: Meditations on History, Ecology and Culture” and a novel, “Panama.” 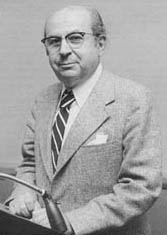 One of the most remarkable and profound thinkers in modern economics – and one of the few whose reputation and influence, despite relative neglect over his lifetime, has only increased over time and promises to keep on increasing.

Nicholas Georgescu-Roegen was trained in mathematical statistics at Bucharest and the Sorbonne – receiving his Ph.D at 24. In the 1930s, he spent three years at Harvard, where he was apprenticed in economics by Joseph Schumpeter – and immediately put his mark on this new field with a few outstanding papers on producer and consumer theory (1935, 1936) – which included a solution of the “integrability problem” as well as killing the revealed preference-derivation of utility (“where is indifference?”, he asked). He also set forth propositions on stochastic choice and lexicographic preferences.

After returning to Bucharest, Georgescu-Roegen took on official duties for the Romanian government, including a position in the post-war negotiations with the Soviet Union. In 1948, Georgescu-Roegen fled Communist-controlled Romania, stowing himself and his wife away in barrels aboard an Istanbul-bound freighter.

Georgescu-Roegen made his way back to the United States, finally settling at Vanderbilt University – finding the time, in the meanwhile, to contribute three seminal chapters to the celebrated Koopmans-edited 1951 Cowles monograph on linear programming and general equilibrium theory. There, we find several contributions – including the independent discovery of the Hawkins-Simon conditions, an alternative existence proof for von Neumann’s system, the general laws of substitutability for Leontief systems and more. His ingenious contribution to the Marxian theory of crisis (1960) is also well-known.

In 1966, Georgescu-Roegen bailed out of the Neo-Walrasian ship with a salvo of critical torpedoes – contained in the insightful and erudite introduction to his Analytical Economics (1966). There, he developed his initial ideas on a new biological or evolutionary approach to economic theory.

His ideas were further developed and consolidated in his magnum opus, The Entropy Law and the Economic Process (1971). Georgescu-Roegen’s claims, among others, were that an economy faces limits to growth, for which he invoked the Second Law of Thermodynamics (“useful energy gets dissipated”). Although generally ignored by mainstream economics, he was hailed by the fledlging environmental movement and, until the end of his life, never ceased to speak out on his ideas for a new approach to economic theory. Today, his work is gaining influence, and his insights are being grafted into the new field of evolutionary economics.